It was my second month of high school, 1980. I was 12. My best friend Linda had gone to a different school and I was trying to find my way at a place known by the students who went there as ‘Spike’s Prison Camp’.

The bursting bladder was the first thing I noticed. At first I just held it in during class and bolted to the toilets in the hourly between-class breaks. I should have twigged immediately that something was wrong, but 12 year old kids don’t think of peeing as a medical issue. It got worse and I was embarrassed putting up my hand to leave class to go to the loo within the hour. I guess at that age everyone just assumed I’d got my period and also was coming down with a touch of anorexia, given that I was becoming rapidly skeletal.

My mother took me to the local GP around then to see why I was losing weight. He gave me antibiotics and said probably a virus. (Fail, fail)

I got thinner and thirstier and spent afternoons lying dazed in sick bay as the fumes of isopropyl alcohol and methanol from the Roneo machine wafted past me. I remember seeing a vase of dying flowers and being desperate to rip the flowers out and drink the murky liquid. I had dreams about swimming in a large pool of coca-cola.

My mother took me to the local GP again and he shrugged, saying it was some kind of mystery virus, and sent me home.

About three weeks out from the first hint of bursting bladder I started to vomit. This lead my mother to resort to one final appointment with the local GP, who suggested they book me in for a lumbar puncture. Bizarre that 1, I never thought to mention to him that I was thirsty and peeing like a fountain, and 2, he never thought to ask me. Mental note – kids don’t always volunteer information about their bodily functions.

It was almost Easter. My father was going away on a fishing trip. He asked me to hold the fishing reel for him so that he could wind on the line but I wasn’t able to hold it up. I didn’t have the strength in my arm by that point. I remember him getting cranky. Frustrated. It was a small ask. Why wasn’t I doing it?

By Easter Saturday I had taken to my bed for most of the day, and my mother started doing what any loving mother would. Sitting by my bedside and feeding me Lucozade when I called out that I was thirsty.

Easter Saturday night I said goodnight to my mother, following it with the quiet announcement, “I think I’m dying.” Two things occurred to me in rapid succession. One. This was melodramatic. Two. The disturbing realisation that I actually did believe I was dying. I was feeling really anxious. But it was just a bad virus. I remember my heart was beating rapidly and my breathing was shallow. I was vomiting periodically.

I went to bed.

When I woke up on Easter Sunday I was almost completely blind. My mother had placed my easter eggs at the foot of my bed and I remember seeing them out of tiny peepholes in the centre of my vision. I stumbled out of my bedroom and asked her to take me straight to the doctor. It did not occur to me to tell her I was almost blind.

When we got to the after hours doctors’ surgery I was too weak to get out of the car. I was in my dressing gown and pyjamas and my mother half-carried me in, propping me up. There was a long queue of people standing in a line to see the doctor. All the seats were taken. I remember no one moving for what seemed like a very long time. Then a man near the front of the queue came up to me and my mother and said we could take his place.

The doctor took one look at me and asked me to pee in a jar. Somehow I managed to get to the little toilet adjacent to the room. A minute after I got back to my seat he dipped the test strip into the jar of wee and announced, “You have diabetes.’

My mother cried. I felt a huge sigh of relief and had a vague memory of seeing a child inject herself with a syringe on TV. It didn’t bother me. I was so relieved to know there was a reason behind this thing and that it could be treated. The doctor was calm and told my mother to take me straight to hospital.

The after hours GP had phoned ahead and I was taken straight in on a trolley. I will never forget the explosion of joy and profound relief as the life-force from the IV filled my body. Cell by cell I was being plumped up again with the correct amount and type of fluid. It felt like every cell in my body was tingling. It was a dreamy pleasure and nothing else mattered. I think the drip stayed in for a couple of days.

I was put in a room by myself for those two days. Nil by mouth. One morning I was fed my first meal which was scratchy, bacon and toast. Then I was taken into one of the large multi-bed rooms in the brightly lit and coloured Children’s ward where I would remain for the next two weeks.

In response to yesterday’s FDA warning about off-label use of automated insulin delivery systems, the core developers of DIY systems AndroidAPS, Loop and OpenAPS shined through once more.

Here is their response: 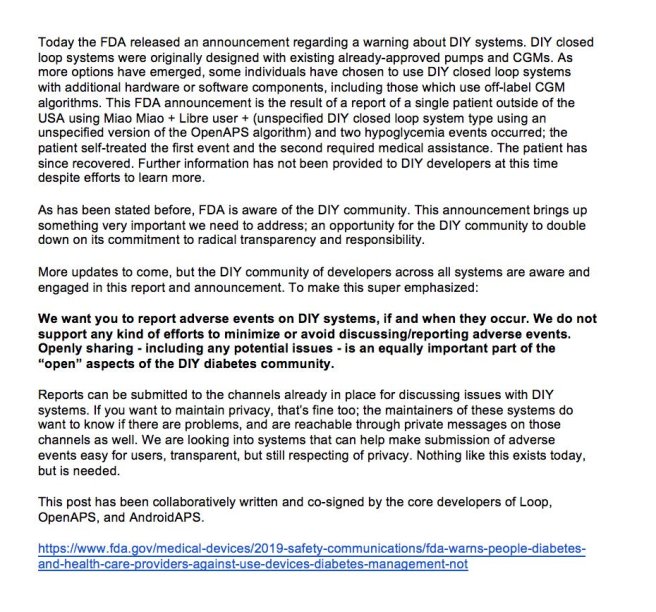 And here is the brilliant blog post by Katie DiSimone that explains everything.